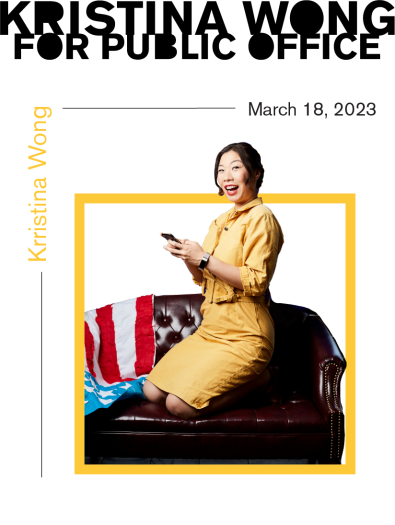 Kristina Wong is an actual elected representative of Koreatown, Los Angeles. But before she created a raucous show about her current stint in Public Office, she was a scrappy performance artist with a bright future in reality television. The system she used to ridicule is now the one she’s become. Is she more effective as a performance artist or a politician? Can she Abolish ICE? Is there actually a difference between performance art and politics?

Kristina Wong for Public Office is a comedic performance that crosses the aesthetics of campaign rallies, church revivals, and solo theater shows to tell the story of what it means to run for local office, the history of voting, and the impact artists can have on democracy.

Written and performed by Kristina Wong

Directed and dramaturgy by Diana Wyenn